There is uneasy tension in the land. Someone is killing off corrupt government officials. The press and the police scramble to uncover the truth behind the mysterious deaths. The President (Gbenga Richards) orders his minister of state (Joke Silva) and Inspector General of Police (Segun Arinze) to solve the mystery in 30 DAYS. Meanwhile, Kene Alumona (CBA) has just arrived from New York for a 30 DAY vacation in his home country. He meets and falls for pretty Chinora Onu (Genevieve Nnaji). Soon his 30 DAY vacation turns into a hellish ride on the train of political intrigues, lies, revenge and murder lies and treachery. Are the murders random killings or is someone intentionally killing off these politicians? Who will be next? How far does the rabbit hole go? The answers may surprise you. Thirty days is an action thriller, a political drama and a love story rolled in to one. 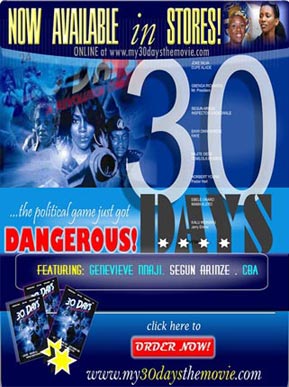